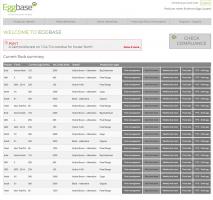 Migrate a suite of static software applications to a cloud-based system, with multi-level access to online processes.

In 2011, Anne Fleck launched a suite of software that covers all aspects of egg production, from monitoring bird and egg numbers to managing feed and water consumption, medical processes and legislative compliance. The software was an immediate success with producers in the north of England, but its popularity proved a stumbling block for Anne, who found herself spending the majority of her time travelling around northern England installing the software on multiple operating systems for people with varying levels of IT skills. This limited Anne’s market geographically and she was spending more than half her week on the road, instead of growing her business.

We took Anne’s Microsoft Access-based system and created online processes to allow multi-level user access, automate tasks, allow remote access, and give Anne the ability to deliver online training. The result is a system that can be accessed by all its users from anywhere in the world, with Anne able to deal with her clients from her office in Cumbria. The cloud-based system has transformed the way Anne and her customers work, and the business has grown by a huge 400% in just 12 months. The USP of Eggbase now that it’s online is that it’s accessible anywhere in the world from any computer, smartphone or tablet. It has different user levels so producers can manage remote farms, put those farms into groups for benchmarking and access data at the touch of a button, wherever they are.

Thanks to Meantime, I've freed up three days a week that I can spend growing the business, and I've been able to take it to a level I never thought possible