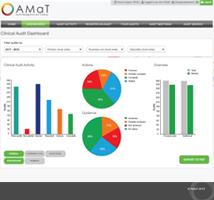 One of the greatest opportunities for increasing efficiency and effectiveness in the NHS is the reduction of unwarranted variation in care. Clinical audit can be an essential tool to help realise those opportunities.

As NHS England notes, clinical audit is a way to find out if healthcare is being provided in line with standards and lets care providers and patients know where their service is doing well, and where there could be improvements. 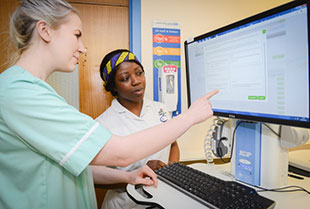 Quality is at its heart, and it is no surprise the Care Quality Commission takes a keen interest in the status of clinical audit as part of its hospital inspection regime.

However clinical audit can be seen as a laborious process for hospitals, with multiple forms to complete for clinicians, junior doctors, nurses and ward staff. Facilitators need to be aware of hundreds of audits, past and present, if they are to use clinical audit effectively. The quality and service improvements recommended in audit action reports can slip down the priority list, in the face of competing demands on time and energy.

Lancashire Teaching Hospitals NHS Foundation Trust is delivering a step change in how it is embedding the use of clinical audit as part of its service and quality improvement commitments through the use of AMaT. The Audit Management and Tracking tool from Meantime IT is designed to streamline auditing requirements in one simple, easy-to-use system.

"AMaT has reduced the time taken to carry out an audit, and increased visibility of the process," said Alison Leather, clinical audit & effectiveness manager. This is helping to make sure that quality improvement actions are more embedded in the culture and activity of the trust.

By providing an interactive and intuitive online tool for trust staff to register, manage and report on clinical audit, AMaT is giving doctors, nurses and healthcare professionals at the trust more time to care, and creating action plans that deliver meaningful improvements on the NHS frontline. 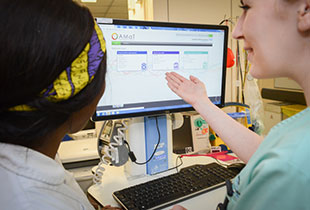 Junior doctors, for example, are expected to carry out clinical audit and quality improvement projects as part of their training. Previously, they might not have known what audits have already been undertaken, leading to duplicate projects that did not address the needs of the trust.

"We could have junior doctors doing duplicate audits," said Alison. "Now with increased visibility of AMaT, junior doctors can see what audits have been done." This means that those embarking on an audit project can focus on areas with real impact, for example by carrying out re-audits of previous quality recommendations, or work with colleagues to focus on areas that have the most benefit.

"We now know what we are doing, so if we wanted to focus on a pathway such as COPD, you can use an audit to get real insight into what is happening in that area."

AMaT is also providing greater visibility of the progress of quality improvements. "We can say instantly, because they are updating their audits, how many have led to an improvement or achieved their criteria. We just wouldn't have known this before," said Suzanne Henderson, project manager & AMaT system manager.

Clinical audit staff also save time through a more efficient process. Previously, they would have to undertake a paper-based process and transfer information into multiple systems, leaving little time to progress actions that had come out of previous audits.

The department has saved over £40k by not replacing retiring staff, after taking on AMaT. The department has also increased the number of projects that they facilitate and support, due to the time released by using AMaT.

"Now we don't have any pieces of paper coming into the office," said Alison. After about 12 months of use, the process now is entirely online.

With AMaT, a series of online forms make the creation and validation of clinical audits simple and quick. More time can be spent examining the actions that have been recommended, supported by automated reminders to those responsible for implementing improvement actions. This is helping to increase the number of audits being carried out at the trust.

"We had around 250 audits every year using our old system," said Alison. "There were 467 audit and quality improvement projects registered last year."

Impact of clinical audit and quality improvement felt across the trust

Governance teams are also seeing the benefits of AMaT. They have increased visibility of audit progress, resulting in a greater focus on implementing change in NHS priority areas such as hand hygiene compliance. They can now actively consider where an audit is required, such as in support of seven-day services, rather than reacting to the audits suggested across the trust.

AMaT also features Ward and Area Audit support, which enables wards to actively complete and action their audits. By increasing the visibility of ward-based audits from other teams such as Pharmacy and Outreach, AMaT has extended the number of people who can give feedback on activity. This has provided a holistic view of safe care being delivered to the patients, and enabled more immediate and responsive service improvement. Previously, such feedback and results would have taken sometime to filter back to the wards and their Matrons.

The visibility of the regular clinical audits taking place on each ward or area also enables the clinical teams to work closely together, and has encouraged nursing staff to embark on their own audit-related projects.

AMaT is also helping staff with the many national clinical audits they have to carry out. Such audits can be seen as time-consuming and struggle to effect positive change, especially if such changes are not clinical in nature. Now, with more visible action plans, and clear status indicators, everyone can see what needs to happen to act on the recommendations.

For example, the national stroke audit (SSNAP) sets out clear areas for development at the trust. The Stroke business manager can access the audit to drive forward both clinical and operational improvements that came out of the audit, allowing healthcare staff to focus on making the changes they can deliver. The manager can then look at wider operational issues to enhance performance.

As a result, specialities such as cardiology can see instantly the progress on their national audits but also the regular, traditionally nursing-related assurance audits at ward level.

The system is also helping with Care Quality Commission (CQC) inspection process. This data-hungry exercise looks to ensure that high standards of care are being maintained. The ready availability of clinical audit progress saves staff the many hours it can take to provide an accurate picture of audit activity and equipment. The trust is even using AMaT to run its own CQC-style exercises to ensure that it meets national quality standards.

Developed to meet the needs of clinical audit teams

AMaT went live in the autumn of 2016, following a trust review of the clinical audit tools available on the market. Trust quality leads wanted to work with an IT supplier to develop a solution that supported its desire to use clinical audit to drive organisation-wide quality improvement.

The result was AMaT, which has been developed to meet the trust's clinical audit needs, and which can be used by others who recognise that proper use of this process through an easy-to-use tool can drive a culture of quality improvement.

We looked at different systems on the market," said Alison. There was nothing that did everything that we wanted it to do, for example ward audits and NICE compliance statements. We thought, there must be something better out there. We worked with Meantime and they have developed a solution that best meets our needs."

Now, over 2,700 staff at the trust have access to AMaT, out of the 7,000 employed. Alongside increasing the transparency and visibility of activity, it is making audit simple by guiding staff through the audit process.

You don't have to be an expert to use AMaT," said Suzanne. It can be checked by everyone with access."

Such global access is leading to many fresh ideas for development. These include the use of AMaT to review the trust's mortality and morbidity performance, and further work around developing it around specific clinical specialities. AMaT is also being explored to support cross-trust audits, so that standards of care can be monitored across the multiple care settings central to the NHS' drive for more integrated care.

For others considering how they might use technology to support clinical audit and quality improvement, Alison - drawing on 25 years in the field - suggests that clinical audit teams look at what will best meet their needs.

Have a look round, and see what you need. Speak to people using the system on a daily basis," she said. I would wholly recommend AMaT, if they wanted to come and speak to me. Come and see how it works in real life."

With quality at the heart of the future NHS, and with frontline staff keen to drive forward that agenda, AMaT shows that it is an essential improvement tool that can be embraced by all.