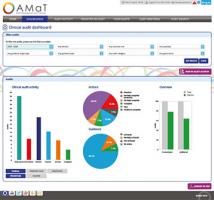 Tracey Brailsford, the Trust’s Lead for Improvement, Innovation and Effectiveness, talks about how the cloud-based system ‘AMaT’ is helping senior leadership and frontline staff learn from performance and continually improve services for patients.


Tracey joined Derbyshire Community Health Services NHS Foundation Trust in 2015, at the time the organisation’s clinical audit activity was largely managed via paper forms and spreadsheets.
“Audits were quite administrative,” says Tracey. “They were sometimes not completed and didn’t always lead to improvement.”

“We did a lot of work to develop from being an audit team to become the Improvement, Innovation and Effectiveness Team,” says Tracey. “We successfully began to change the culture of the organisation to help people to see clinical audit as a quality improvement methodology.”

“The system we were using was still administrative in that it could only be accessed by clinical audit staff,” says Tracey. 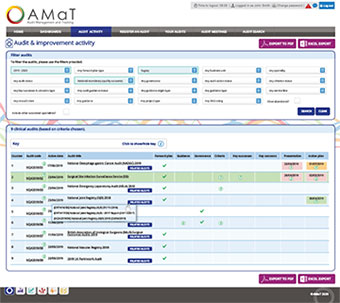 “We needed a view, organisationally, of what was happening around quality improvement, clinical effectiveness and clinical audit,” says Tracey. “We needed to be able to shine a light on where brilliant activity is happening locally, and where it is not.”

In her role as the Improvement, Innovation and Effectiveness Lead, Tracey discovered AMaT, a system developed with NHS clinical audit teams to give more control over audit activity and to provide real-time insight and reporting for clinicians, wards, audit departments and healthcare trusts. With support from the organisation’s chief nurse, the medical director, and her managers, Tracey oversaw the deployment of AMaT in 2020.

“I built a business case for AMaT with the argument that it would give visibility to where teams are doing really well and where we might need to have some concern,” says Tracey. “It would reduce repetitiveness, improve access and visibility, and save clinicians' time when using the system, who would have easy visibility about audits they needed to complete.”

The Trust’s internal assurance framework, Quality Always, which Tracey describes as like “CQC on a local level”, has easy access to the AMaT reporting dashboards and the ability to drill down and examine any service.

AMaT has been rolled out across the Trust and is being used both by services on the ground and senior leaders. It is providing visibility to external organisations including commissioners and organisations such as the CQC.

“The feedback we get is incredible,” says Tracey. “I have not had a single person use it and say they don’t like it.”

Clinicians proactively contact the Clinical Effectiveness Team, wanting to use AMaT to better understand and improve frontline services. This helped the Trust face challenges which were specific to the pandemic.

“Shortly after go live, the chief nurse rang me with a requirement to do an organisation-wide hand hygiene audit,” says Tracey. Even with her team largely redeployed, and working from home, the Trust was able to rapidly launch the audit in AMaT for the entire county and its 4,500 staff.

“This led to immediate improvement. AMaT highlighted a ‘red area’ with compliance on people not using hand gel from their wrist to their elbow,” says Tracey. “People knew they should wash from hand to elbow with soap and water, but not everyone knew to do that with hand gel. We did some comms to make sure everyone was aware of best practice. Without AMaT we wouldn’t have known we needed to address that at an organisational level.”

Covid also led to new ways of delivering services for which the Trust used AMaT to assess effectiveness. Tracey explains: “All of a sudden our community physiotherapists, for example, were doing consultations via video – they were keen to evaluate that. Using AMaT we were able to send surveys to patients and to staff.” There might be “anecdotal fear and myth about “doing a video conference with an 80-year-old with a broken hip”, she adds. “Sending a survey to a patient and finding they loved it is really powerful evidence that it can work.”

An organisation engaged with clinical audit


Within a year, AMaT had “raised the profile of using audit in the Trust to improve quality”.

“We want people to be engaged and excited to improve care for patients, rather than seeing audit as a chore,” says Tracey. 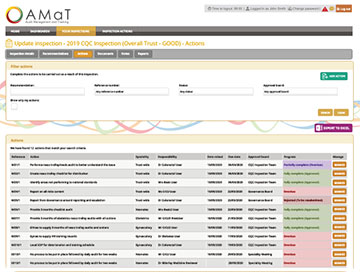 “I have noticed an increase in people coming to us who want to do different things. People who notice that their results in an area are not 100% or 95% have come to us, asking what they can do to improve.”

One example of this involves the Trust’s four urgent treatment centres.

“They approached us to use AMaT to place audits in the system. All their audits are now on the system and visible across the trust. If there were any points of concern, they would become visible very quickly. The tick-box bit is that they are providing the evidence needed for commissioners – but the quality piece is that the senior leadership team and the staff themselves have really engaged in it. It is really easy for them to fill in and see results.”

AMaT can help with standardising how services are measured, and because each area is using a shared pro-forma, this enables organisations to provide meaningful feedback to commissioners when variation in commissioning requirements impacts on service provision.


Tracey sees many possibilities for improving care. “If you have an interest in falls prevention, for example, you can now look at performance across the organisation – whether you are the falls prevention lead, the chief nurse, or the CQC.”

Importantly the ‘helicopter view’ across the county offers significant potential to reduce variation in care. She gives another example: “If we decided to do an audit around lower limb wound management, we would have a county-wide picture of compliance with the evidence base. If there was variance, we would be able to pick that up quickly.”


Tracey emphasises that AMaT is helping clinicians to avoid wasting time. She describes how doctors are required to carry out audit as part of their professional development, which she says has led to a culture in the NHS of doctors often doing this in isolation. “Sometimes, no one knows they have done the audit, other than the person reviewing their professional development.”

Through AMaT, all audits and projects are now visible and, along with their action plans for improvement, can be picked up by the next clinician for re-audit. This creates a “real legacy”, and ensures a “robust, scientific methodology is used”.

Tracey says this is helping to avoid “ticking boxes… enabling clinicians to be collaborative workers on a project”.

“We are not in the business of doing audit for the sake of audit,” she adds.


With staff across Derbyshire now using the system to learn from each other’s performance, Tracey sees the potential for AMaT to be used nationally. “It’s not just about benchmarking results. It’s about driving a culture of improvement. There is a lot of power in sharing and collaborative working across systems.”

“There is something to be said for it being a nationwide, cross-trust system. We can all learn from each other’s best practice.”