I’ll have a slice of that, please!

We have a new toy here in the Meantime office and, as is typical of our dedicated developers, it’s something we can put code into. 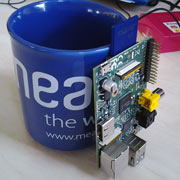 The new Raspberry Pi is a compact circuit board that has everything needed to run a traditional computer. Everything, that is, apart from the operating system. And the keyboard. And the monitor. And... You can see where we’re going with this.

The idea behind this lovely little slice of technology is to encourage children (and fully grown developers) to write their own code. As the makers say, it’s a “capable little PC which can be used for many of the things that your desktop PC does, like spreadsheets, word-processing and games [and] high-definition video.” The only catch is, you have to build it all yourself.

We’ve been conducting highly scientific, extremely technical experiments here in the office, and have discovered we can run Jelly Bean, the Android operating system, through it. We’ve also got it hooked up as a projector, and it’s doing a much better job than our purpose-built and significantly priced piece of kit. 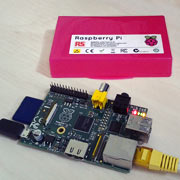 The operating system needed to run the Pi can be downloaded to a simple SD card from the company’s website (www.raspberrypi.org/) and most people have at least one of these knocking around the house in the back of a drawer or languishing in an old camera. Once you have everything configured, it can be hooked up to a keyboard, mouse and monitor, or you can go freestyle and start experimenting.

There’s a whole community of enthusiasts out there building things that people can use with their Pi: some are concentrating on the coding side, while others are going wild for robotics by hooking it up with a PCB with a motor and programming it to power a buggy or robotic arm with a sensor so it can navigate its way around rooms or pieces of equipment.

The primary function for the Pi is to educate, and its creators are hoping to have one in every classroom. It can be loaded with a variety of coding languages - we’ve been working with PHP here - but the possibilities are endless.

Anyone with basic computer knowledge can work their way around the Pi, and at only £25 it’s probably the least expensive toy on your child’s Christmas list, with a potentially huge return in terms of skills they’ll retain for life.

The creators of the Raspberry Pi say they want to see it being used by kids all over the world to learn programming. We do too.