Congratulations to our web developer Danny Davies, who married his sweetheart Teresa on the 14 May. 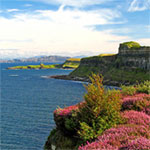 The happy couple tied the knot in a humanist ceremony on the Isle of Skye in the company of 10 close friends and family members after a whirlwind romance in which Danny proposed to his former colleague after 17 days of becoming an item. The bride was beautiful in blue and the groom observed Scottish tradition in a fine tartan kilt - thankfully there are no reports of any strong winds on the day so we’re unable to confirm or deny whether any other Scottish traditions were followed.

Back in the office, Paul’s JukePi has been going down a storm, with staff members queuing up to, er, queue their musical choices. Despite the eclectic tastes of the Meantime staff, most soundtracks have been music to our ears. We’re all still trying to come to terms with Soulfly's World Scum, though. Thanks for that 'interesting' selection, Paul.