Welcome to Otto, the new kid on the block

Being on the edge of the Lake District, we’re lucky enough to work in one of the most beautiful parts of the country; some may say the world. 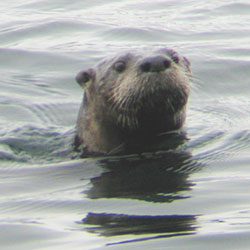 While we don’t overlook any of the great lakes themselves, we do see an amazing array of wildlife from our offices on the banks of the River Kent in Kendal.

We see the usual raft of mother ducks followed by lines of obedient yellow ducklings, and the signets yet to match the grace or beauty of the adult swans. But our favourite neighbours by far are two animals that wouldn’t be seen on any city’s canal or town’s park lake.

The first is a tall, long-beaked heron which stands proudly on its favourite rock, occasionally dipping its head for a fat, juicy fish which it gulps down in one quick swallow. It’s a sight to behold, and one which we’re lucky enough to be able to glimpse when we look up from our lines of code and gaze out of the office windows.

The second is an animal that is notoriously shy and rarely spotted, even by those who spend hours quietly watching and waiting for their quarry.

One chilly April afternoon, just before dusk, our technical director Steve had stepped outside to the river’s bank to indulge in his regular habit of ‘a breath of fresh air’ (he’s on about 10 ‘fresh air’ breaks a day). As he inhaled his air and pondered his programming, his gaze happened upon an unusual movement on the edge of the low river. Unlike the ducks and swans on the surface, this animal appeared from beneath the water. Transfixed, Steve observed an otter with its smooth, sleek brown fur pause momentarily on the shingle river bank before dipping back into the water and back upstream.

We’ve seen Olivia (Steve found out she was a she, don’t ask us how) a couple of times since, always in the same spot and always for just a few seconds each time before she heads back in the same direction and, we presume, her nest.

So while we may be far from the madding crowds of London and the silicon centres of industry, we’re quite happy in our little green corner of Cumbria, sharing our space with creatures rarely seen.