July’s been a funny old month in the Meantime office. Paul’s continuing to do his best mad scientist impression with his increasingly inventive Raspberry Pi offerings, the latest being a cyber judge to manage the office playlist . Which is, of course, piped into our office via the medium of a Raspberry Pi jukebox. He also manages to fit in some top-notch coding for clients as well, which is always a bonus. 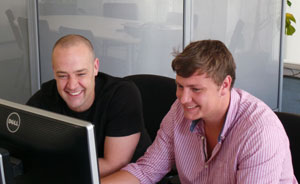 Fenner was most distraught to learn that JudgePi had decreed Alphabet Wednesday to be all artists beginning with O on a day he was out of the office. He’d been waiting for the Judge to randomly select O for at least two days, and had his OMD Greatest Hits all queued up and ready to go. As it was, Fenner had to make do with turning his iPod up really loud when Enola Gay came on; so loud that his fellow passengers on the London-bound train could hear it too.* Apparently they love it when people do that.

Meanwhile, back in the office, star developer Jack Akrigg got yet ANOTHER call from the media. This time, it was the New York Post asking for his opinion on the career of the new Bank of England governor, and whether putting a Canadian in the historic post was a wise move. Oh no, hang on... that was last week. He gets so many media requests I get confused. No, it was the Westmorland Gazette who will be running a spread on apprentices featuring our Jack; we’ll link to the article as soon as it’s out. Rumours that the Fox Network is negotiating terms for his new reality show, Aksessing the Akriggs, are as yet unconfirmed.


*DISCLAIMER: Fenner has never, to the writer’s knowledge, indulged in anti-social behaviour of any kind either while on a train, any form of public transport, or anywhere at all. Never. Never ever.