The only way is Kendal

Just as our apprentice Jack was settling nicely into his role as Meantime’s media darling, he was usurped by our technical director, Steve. He was contacted by Granada TV and interviewed about his move from civilised Cheshire society to the wild and windy hills of the Lake District.

The news item aired on Border TV on 24 January and looked at how businesses attract workers to the Kendal area, the part house prices play and whether the cost of property is prohibitive in retaining businesses and their workers. You can see the news item here (our part starts at 01.11) 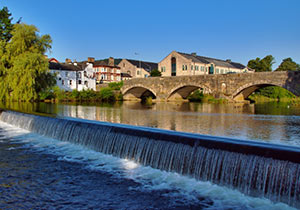 With house prices in Kendal up to double those of some other areas of the northwest, it’s an issue we’re very much aware of. We take a huge amount of care in selecting our team and place as much importance on personality as we do ability to do the job in question but that has meant widening the net.

The majority of people who come to work with Meantime have either moved from elsewhere in the country or put in regular 200 mile round trips to get to the office. The aforementioned Steve is the only member of the team who lives in Kendal itself; as noted on the programme, affordable housing in the town is very difficult to acquire.

While we’re acutely aware of the housing problems in the immediate area, being based in Kendal has never been an issue for us. When people respond to a job advertisement or hear that we’re looking for staff on the IT grapevine, they’re always very pleasantly surprised to find that our office isn’t in Canary Wharf or a soulless industrial estate in Slough, but in a beautifully renovated stone building overlooking the River Kent.

We’re not naïve enough to assume that house prices and business costs don’t play a part in the decisions of businesses to locate themselves in the places they choose. But for us, our location is part and parcel of the Meantime package. We can’t separate it from who we are and what we do, and we certainly couldn’t - or wouldn’t - up sticks and move to that Slough estate just because we were offered a 50% discount on rates and an attractive relocation package.

We see our surroundings as a positive. Kendal itself has issues which the council is addressing, and we applaud them for that. But look a mile or two outside the boundary and you’ll find beautiful villages and small towns which provide the lifestyle at an affordable cost. For those who don’t want to up sticks and live the country life, home-working with occasional trips to the office for meetings is a way of working we’ve adopted for many years.

The type of people we want to attract are the type of people who want to work here, with us. Whether they’re based in a South Lakeland village or have a weekly commute up the M6 is irrelevant - we pride ourselves on making Meantime a happy place to work and we will accommodate the needs of our team. But the heart of Meantime is in a beautiful location that’s as inherent to who we are and what we do as the servers that store your data.