Software from Meantime IT helped to ensure the smooth opening of the £26 billion Terminal 2 at Heathrow Airport. 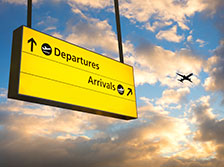 Terminal 2 – or to give it its full name, ‘Terminal 2 The Queen’s Terminal’ – is Heathrow Airports Ltd’s fifth terminal, and successfully re-opened on 4 June. Before the terminal opened to the public, Meantime’s software managed trials which saw nearly 14,000 volunteers take part in detailed simulations of passenger movement in and around the terminal. The system managed everything from initial registration of volunteers to tracking their movements around the airport.

Meantime’s software was busy processing data from the moment the potential volunteer ‘passenger’ applied to be part of the trials via a public website registration system. Information was gathered to assess how often the volunteer had travelled and whether they would be familiar with the airport routine - essential for Heathrow to ensure a realistic mix of people took part in the trials. Once the volunteers were registered, a security background check was carried out to ensure they were approved to go airside.

Heathrow was then able to use the administration element of the system to set up trials, call in volunteers and deploy them around the terminal. Trials included testing smaller individual areas such as baggage collection and passport control, through to larger end-to-end trials which simulated the full passenger journey around the terminal. Passengers’ movements were tracked by Meantime’s in-built barcode system, with a barcode assigned to each passenger which they then scanned at checkpoints around the terminal.

The system managed the deployment of thousands of ‘passengers’ around the terminal, including people with restricted mobility and those who were not frequent flyers. The realistic mix of people taking part allowed Heathrow staff to gain a true picture of passenger traffic through the airport and identify any areas for improvement before the terminal opened.

More than 20,000 people registered successfully for the trials, of whom 14,000 were deployed. The end-to-end trials managed over 3000 people on the day, following their movements throughout the whole of the passenger journey to ensure the terminal was running smoothly.

Terminal 2 is the latest step in the transformation of Heathrow. It has been designed from the outset with the needs of the individual passenger at its heart and with sustainability as a guiding principle.

The software Heathrow used for its T2 trials was an adapted version of a solution Meantime developed to manage volunteers at the airport during the 2012 Olympics. The Heathrow Games Volunteer Programme was so successful in managing the recruitment of volunteers and their subsequent deployment around the airport, it was rolled out for general use at times of peak activity and renamed the Volunteers Ambassador programme. More than 30,000 Heathrow volunteers have been recruited and managed by Meantime’s software to date.