Flying the nest - and landing with a bump

You’ll often hear us say that one of the best things about working here at Meantime is our location; nestled in our little corner of the Lake District but within easy reach of the big cities. 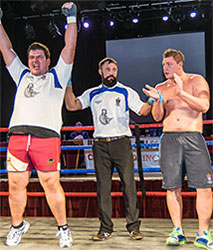 This was a conversation Fenner had with a reporter from The Times at an event recently, and she thought it would make a great addition to their Business Insight North supplement..

Despite being real homebirds, we’re not afraid to fly the nest now and again. Our operations manager Hannelie is spending the festive season down in Cape Town this year, and we all wish her a very merry Christmas with her family. Lou, meanwhile, jetted off to Munich, also under the guise of catching up with family but we all know she was really packing her case with stollen for the office. We’re still waiting for the delivery actually. Lou? Lou?

Jack hasn’t flown the nest, but he has had a crash landing - on his behind, in a boxing ring. That’s right, our rugby-playing media star Jack has turned his hand (fist) to boxing, taking part in his first match last week at Ulverston’s Coronation Hall. Alas, our Jack hit the decks one too many times and lost, but the organisers described his bout as "the match of the night" and called him "a cracking guy." But we already knew that, didn’t we?

Finally, we’d like to use this last round up of office news in 2014 to wish you all a very warm and wonderful festive period and a prosperous 2015.