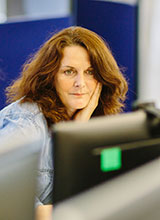 Louise Illingworth is Meantime's designer and has been with the company since 2006. She's responsible for the look and feel of everything we produce, whether that's a business processing system or brochure site. Here, she gives us an insight into a typical day.

"I live in Cheshire, around 100 miles from the office, so if I'm in the office it's an hour and a half commute which means an early start, but I'm lucky to be able to work from home several days a week.
My day usually starts with a briefing with Steve, our technical director, on what the priorities for the day are. Once a week we have a team meeting where we go through all the current and upcoming projects and get a clear understanding of who's doing what and when.

I work closely with the developers, and while they're working on the back-end development I'm focusing on the front-end build, and although the look and style of a system or site can be just 5% of the overall project, it's 100% of what the client sees so it's important to get it right.

I talk to the client about their expectations and how they want it to look, then I'll create some design mock ups for them to approve. When the team is happy that the design will work with the functionality I can go ahead and start creating templates for the developers to work with.

I'm usually working on several projects at once, so I need to be able to switch from one design to another at a moment's notice. I may be in the middle of creating a template for a new client, but then stop what I'm doing to address any issues the developers have found in a project that's nearing completion.

That's one of the things I love most though - the variety in what I do. Because we have such a varied client base, I could be working on a piece of corporate software one minute and an app the next.
At Meantime we're committed to delivering on time, that's what I thrive on though; I get a real adrenalin buzz from pulling out all the stops."

We have a great team here at Meantime, we’re all enthusiastic and genuinely enjoy what we do. We also work in a fantastic office with an amazing view, what could be better than that?

I love the atmosphere in the office; we’re all different ages and personalities but somehow we fit together really well as a team. Everyone is really positive and enthusiastic and whether it’s working on a really important project or making the tea, everyone joins in.